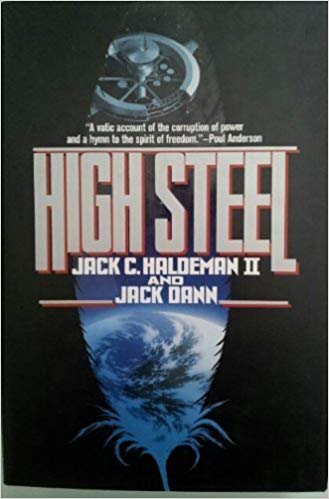 Reading High Steel by Jack C. Haldeman II and Jack Dann was like breathing pure oxygen…. Various imagined futures—from hard sf through Cyberpunk—intersect en passant in narrative sequences of astonishing equipoise and thrust…. Most of the book is a predator, like a cat with blazing eyes, gorging on the good meat of genre: Dick, William Gibson, Gred Bear (for transcendental AI-shamanism shticks here very succinctly conveyed), Joe Haldeman, many others. There are aliens, and Jupiter, and FTL, and Einstein the AI god, and ghost dances, and marrying out and New England School of Ethical Romance sehnsucht à la Richard Grant and Co, and a kitchen sink. And it spins high and dry and off the end of the last word. It is most highly recommended. (John Clute, editor of the Science Fiction Encyclopedia)

High Steel is more than an exciting adventure full of vivid, convincing detail about life in space. It is a vatic account of the corruption of power and a hymn to the spirit of freedom. (Poul Anderson)

Haldeman and Dann have melded Native American spiritualism with hard-edged space technology to create the kind of story that makes science fiction so exciting: the best of two worlds. And more! (Ben Bova)

The savagery, remorselessness, refracted myth and metaphoric resonance of HIGH STEEL bring to mind many other Jack Dann works which I have so much admired—The Man Who Melted, Timetipping, Junction — and Haldeman’s enormous contribution to the novel can be found in his characteristic technological rigor and visionary spirit. This is not to say that the X elements are Dann and the Y elements Haldeman’s alone; as the author of several collaborative novels I know the hazards and traps of these easy judgments … fairer to say that the writers have found a third voice, one which could not have been negotiated by either and this third voice, persuasive, authoritative and ultimately ungiving of easy answers has rendered High Steel an occasion and a triumph. (Barry N. Malzberg)

Combing Native American lore with hard sf, co-authors Haldeman and Dann create a suspenseful and fast-paced drama that focuses on one man’s struggle to beat the system by holding to the ways of his ancestors. (Library Journal)

A well-told tale that promises well for any future shared effort. (Booklist)

Put your money down and take home High Steel, a novel of science fiction that lingers in the mind as only the best such writing does… Take the American Indian as we have known them in the past and know them now, put them in self-contained corporations in outer space, corporations as powerful as nation states on the planet Earth, add a deadly struggle for power, fashion this mixture out of prose that is lyrical and memorable and the result is the novel High Steel…  I send my congratulations to Jack Dann and Jack C Haldeman for one hell of a read. (Harry Crews)