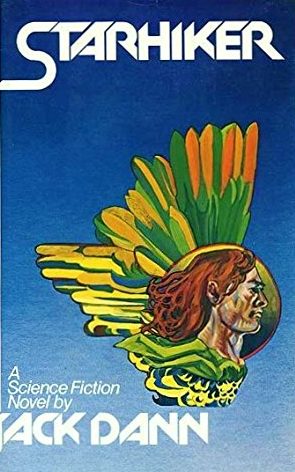 “In every reader’s life there are books which leave the world a different place because you have read them.  Starhiker is one of them.  It will not give up all its delights, all its perfections, on one reading.  It is a superb book…”  (Marion Zimmer Bradley)

Starhiker is ostensible a straight-forward adventure story, but what begins as external action from the floating city of The Fragrant Could to the land of the Tfeligen becomes an internal landscape in which Bo, a wandering minstrel from earth, must travel.

The time is thousands of years in the future when the earth is a backwater planet  ruled by a race of benevolent despots called the Hrau. Our solar system is only a minor interstellar relay stop controlled by the Hrau. However, Bo’s vivid imagination is a powerful weapon against the Hrau’s restrictions as he secretly roams from colony to colony seeking truth and the company of kindred spirits. The blind pursuit of an impossible destiny leads him just to the other side of his dreams.

The reader who can appreciate Sam Delany at his best or the enormous constructs of Roger Zelazny in Lord of Light, will probably follow this book with breath-taking excitement, savoring every word. In a very real sense, it is an experience with the almost-Oriental development of nonlinear consciousness, evasively summed up in that mysterious first line of the Tao Te Ching: ‘The Tao which can be apprehended is not the real Tao.’ The same can be said for the ‘real’ universe, or for the universe which Jack Dann is trying to evolve in Starhiker. And yet the story is deceptively linear on the surface, without any of the fuzzy and chaotic masses of `avant-garde’ writing, by which the amateur and imprecise ‘New Wave’ writers attempt to evoke a universe beyond physical apprehension. To visualize the completely unknown—and then to put it clearly and precisely into words—this is the impossible task which Jack Dann has set himself, and which, to an incredible degree, he manages to accomplish. In one sense it will remind the reader of Le Guin’s The Lathe of Heaven, the evoked sense that the Universe is to a large degree what you believe it to be; in yet another sense it will remind the experienced reader of Poul Anderson’s Tau Zero, the bewildering and blinding sense of being overwhelmed by the sheer size and power of the unknown.

And yet it is absolutely unlike either of these books. It is probably the most original novel I have read in the whole science fiction universe in the last decade or so.

In every reader’s life there are books which leave the world a different place because you have read them. Starhiker is one of them. It will not give up all its delights, all its perfections, on one reading. It is a superb book, and if it does not win some kind of award it will go to confirm my long-held opinion that in general the readers of science fiction do not know much about the standards of excellent fiction…and that the writers know very little more. (Marion Zimmer Bradley)

Technology, mathematics, poetry, and philosophy mix into a stimulating brew that drives the reader into research, further encouraged by an impressive bibliography… There is a message in this book for readers who do not expect it to be plastered conspicuously on the surface. The style reveals the skill of a true poet who can create pictures with a few perfect words. Recommended. (Library Journal)

Beautifully written, presenting the question of what is alien and what is truth among spirits who mesh in understanding in spite of tangible differences. Columbus Sunday Dispatch

This is a novel that reads smoothly, with events, impressions and thought provoking ideas being subtly presented within almost every paragraph… There is a lyrical, poetic quality about the narrative. The words fit well together and flow smoothly… Starhiker is a functional integration of many ideas, and in this case, the whole is much more than the sum of its parts. (Thrust)